Runyon Field is the youth baseball hub for all of Southeastern Colorado. The complex, which boasts six baseball/softball fields and one off-site field, is a favorite destination for regional tournaments. Pueblo's climate offers a much longer playing season than other locations in Colorado, which also helps make Runyon field a very popular baseball venue.

Runyon Field is named after Damon Runyon, a sportswriter who grew up in Pueblo. Runyon is best known for his work in New York as a sports journalist, but he started writing for the Pueblo Chieftain in 1910. He later moved to New York and became famous for both his journalism and for authoring several short stories. One story, titled “Guys and Dolls”, became a major Broadway musical.

In 1995, Pueblo County renovated and expanded main field at the Runyon complex, and named the field after Runyon's former colleague at the Pueblo Chieftain, Oneal Hobbs. Hobbs was known as a tireless supporter of baseball in Pueblo.

The Runyon complex is also well-known for hosting the annual Father's Day "Nuch" (pronounced 'nooch') tournament. The tournament (and one of the complex fields) is named after well-known local baseball advocate, Anthony Andenucio, who passed away in 1977. This tournament brings very talented teams from around the country to Pueblo every year. 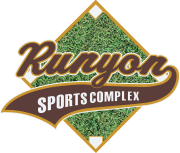 Coming into Pueblo (South on I-25):
Take Exit 98A. Take a right on Sante Fe at stoplight (going north). You will see green directional signs for "Runyon Field". Take interstate entrance for Colorado Springs. Take another left and you will see the sign for Runyon Field.

Coming into Pueblo (North on I-25):
Take Exit 98A. Then just as you get off you will see a green Runyon Field sign. Take a right and you will be in the Sports Complex.

For more information and to register:  https://runyonfieldsportscomplex.org/