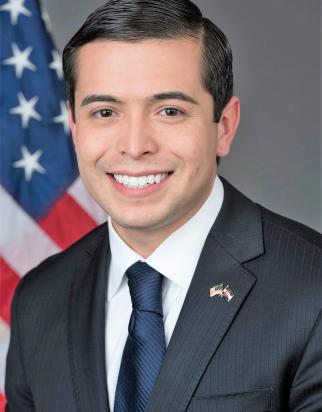 Chairman: Pueblo Board of County Commissioners

Pueblo County Commissioner Garrison M. Ortiz, a Pueblo native, attended Pueblo Community College while in high school, receiving both his diploma and associate degree before moving on to Colorado State University Pueblo.  He completed the 3+2 Program, earning his Master of Business Administration Degree.

Upon graduating, he worked as a consultant, developing strong international business experience throughout the U.S. and parts of Canada and Mexico.  As a contractor, Mr. Ortiz help businesses implement enterprise-wide budgeting, forecasting and reporting systems in both the public and private sector.

In 2017, he was named Outstanding Professional of the Year by the Latino Chamber of Commerce and received the Pueblo County Sheriff’s Office Commendation for Outstanding Service, Dedication and Professionalism.  He was named the Top 25 Most Influential Young Professionals in Colorado Business in 2018, and received the Latino Chamber of Commerce’s 40 Under 40 Award in 2019.  Colorado State University Pueblo named him the Distinguished Alumni of the Year in 2020.

He is dedicated to helping his community with his strong financial background and entrepreneurial approach to government.